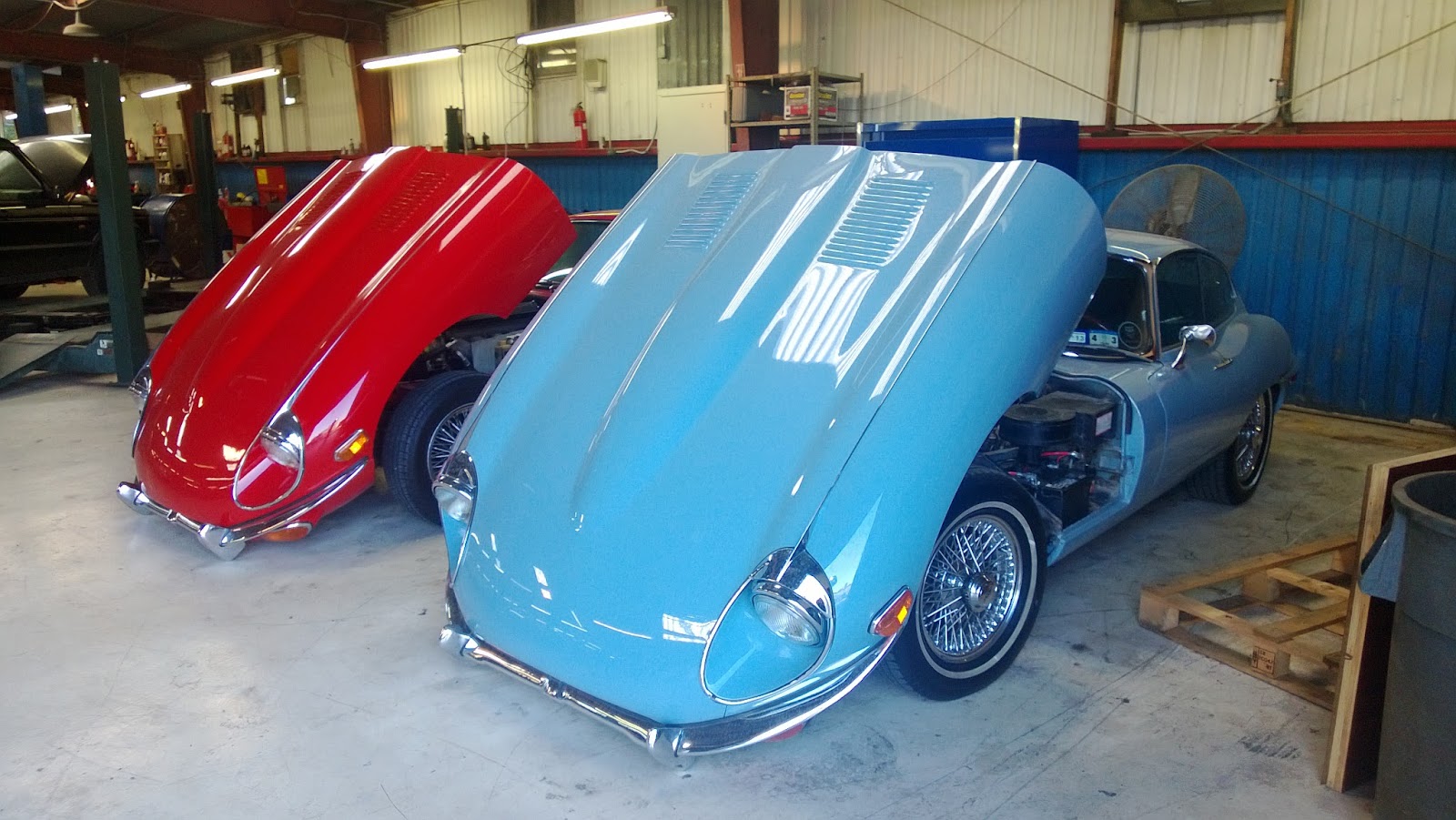 To better serve our British classic car customers we converted a section of our reman department into shop space at the 8101 Hempstead location. The new space has 3 bays, 2 lifts dedicated to classic Jaguar, MG & Triumph repair. We are proud to have two of houston’s most experienced classic british car technicians teamed up to get your car back on the road.

From engine tune-ups to complete engine rebuilds Motorcars Ltd can Recondition your Classic British Car to perform as good as new. We are Houston Texas’ answer to your British Classic Car problems.

Background
Considering the number of British car clubs around the country and the active membership supporting them, ownership of classic British vehicles appears to be as popular today as it ever has been. British marques from Jaguar’s famous E-Type (XKE) to the Triumph Stag are represented and the reasons for owner enthusiasm is as varied as the number of makes and models represented.

Certain models epitomize the classic car sector, typically Jaguar, MGB and Midget, Austin-Healey and Triumph sports cars. These iconic British marques have been successful as a result of large production volume, their ability to meet the needs of their enthusiastic owners and maintain timeless appeal.

Motorcars LTD is committed to the preservation, usage and enjoyment of these historic British marques and has dedicated the resources necessary to support Houston area car owners’ with access to highly skilled mechanical and repair services at the 8101 Hempstead Rd. location.

In 1961, Jaguar introduced what is probably their best known vehicle, the E-type or XKE as it was known here in the former colonies. Seductive styling enclosed the XK 3.8 with three carburetors proven in the XK150S while independent rear suspension kept the power to the ground. The new uni-body Mark X received IRS as well.

In 1963, Jaguar entered a new model between the big Mark X and compact Mark II in the form of the S Type equipped with IRS and choice of 3.4 or 3.8 liter engines. This would become the 420 in 1966, a name derived from its 4.2 liter engine. Also in 1963, Jaguar acquired Grand Prix engine builder Coventry Climax to build a V12.

Jaguar simplified its saloon line-up in 1968 and introduced the XJ6 in 4.2 or 2.8. The 1971 Series III E-type received the 5.3 liter, aluminum block, transistorized ignition V12 and a wider track and bigger tires to handle the power. A longer floor pan for the 2+2 allowed optional automatic transmission. Power steering was standard.

In 1972, our company, Motorcars LTD, was formed in Houston, Texas to service these Classic British cars.

The MG Car Company Limited was a former British sports car manufacturer founded in the 1920s by Cecil Kimber.

The 1924 MG 14/28 was the earliest model that featured a new "sporty" body style sitting on a Morris Oxford chassis. The MG model 14/28 persisted through several versions following updates to the Morris. The first model considered a “new” MG, as opposed to a modified Morris, was the 1928 MG model 18/80. The MG 18/80 had a purpose-designed chassis and marked the first appearance of the traditional MG grille.

Based on a 1928 Morris Minor chassis, the 1929 M-Type was the first of a long line of smaller models known as “Midgets.” MG established a name for itself in the early days of international automobile racing. Prior to World War II, MG produced a line known as T-Series Midgets that exceeded post-war expectations with worldwide shipments. Based on the pre-war MG TB (with various degrees of updating) the T-Series Midget included the MG TC, MG TD, and MG TF.

With the release of the MGA in 1955, MG had departed from pre-war designs and its earlier Y-Type saloons. In 1962, MG followed up with the MGB meant to satisfy growing demand for a more modern and comfortable sports car. In 1965 MG released the fixed-head coupe (FHC) model MGB GT. To comply with the United States increasingly stringent emissions and safety standards, the MGB received continuous updates throughout the 60s and 70s until its final production year in 1980.

MG produced the short-lived model MGC between 1967 and 1969. Based on the MGB body, the MGC was fitted with a larger but heavier six-cylinder engine that contributed to the car’s somewhat worse handling. MG also began producing the MG Midget in 1961. The Midget was a “re-badged” and slightly restyled second-generation Austin-Healey Sprite. To the dismay of many enthusiasts, the 1974 MGB was the last model made with chrome bumpers due to new United States safety regulations. The 1974½ model had thick black rubber bumpers that many felt ruined the lines of the car. In 1973, the MGB GT V8 with the ex-Buick Rover V8 engine was launched and was built until 1976. As with the MGB, the Midget received frequent modifications until the Abingdon factory closed in October of 1980.

The Triumph Motor Company was a British car and motor manufacturing company. The marque had its origins in 1885 when the German Siegfried Bettmann  initiated S. Bettmann & Co and began importing and selling bicycles under his own trade-name in London. The trade-name became "Triumph" in 1886, and by 1889 the businessmen started producing their own bicycles in Coventry, England. If you’re interested in Triumph company history, you’ll find a great write-up here.

The last Triumph model sold was the Acclaim, but it was nothing more than a rebadged Honda Ballade and was built under license at the former Morris works at Cowley in Oxfordshire, England. The Triumph Acclaim was produced until 1984, after which the Triumph name disappeared completely. Future British Leyland and Honda Cooperative productions were marketed under the Rover badge. The Triumph trademark is currently owned by German car maker, BMW, which acquired trade name rights in 1994 when BMW bought out the Rover Group.

Motorcars Ltd Houston can perform any service on your British Classic click on the following link – Schedule Service and let us pamper your classic.