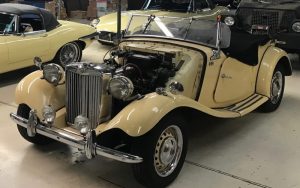 Motorcars Ltd provides top quality service and repair for your MG in the Houston, Texas area.

Motorcars Ltd offers a complete range of services for your MG. We are experts on the Classic MG models.

From engine tune-ups to complete engine rebuilds Motorcars Ltd will recondition your Classic British Car to perform as good as new. We are Houston’s answer to your Classic MG repair and maintenance requirements.

Motorcars Ltd was founded in 1972 right in the middle of the British car hey-day…. people were actually driving these cars to work every day… and when we started, we quickly realized that the MG’s needed routine maintenance along with the other British classics we were servicing. It was a pretty crazy time – we performed full restorations on MGTC’s and XK120’s and maintained daily drivers of the same vintage – at one point, we had over 12 full restorations in progress!

Today, Motorcars Ltd retains a special place in our shop for the mechanical service, repair and maintenance (no, we no longer do full restorations) for the driven British Classic Cars…from Classic Jaguars, MG “T” Series, MGB, TR6, XKE, Austin Healey, Bug Eye Sprites, MGA… we keep them all on the road.

A Closer Look At The Classic MG

The MG Car Company Limited was a former British sports car manufacturer founded in the 1920s by Cecil Kimber.

The 1924 MG 14/28 was the earliest model that featured a new “sporty” body style sitting on a Morris Oxford chassis. The MG model 14/28 persisted through several versions following updates to the Morris. The first model considered a “new” MG, as opposed to a modified Morris, was the 1928 MG model 18/80. The MG 18/80 had a purpose-designed chassis and marked the first appearance of the traditional MG grille.

Based on a 1928 Morris Minor chassis, the 1929 M-Type was the first of a long line of smaller models known as “Midgets.” MG established a name for itself in the early days of international automobile racing. Prior to World War II, MG produced a line known as T-Series Midgets that exceeded post-war expectations with worldwide shipments. Based on the pre-war MG TB (with various degrees of updating) the T-Series Midget included the MG TC, MG TD, and MG TF.

With the release of the MGA in 1955, MG had departed from pre-war designs and its earlier Y-Type saloons. In 1962, MG followed up with the MGB meant to satisfy growing demand for a more modern and comfortable sports car. In 1965 MG released the fixed-head coupe (FHC) model MGB GT. To comply with the United States increasingly stringent emissions and safety standards, the MGB received continuous updates throughout the 60s and 70s until its final production year in 1980.

MG produced the short-lived model MGC between 1967 and 1969. Based on the MGB body, the MGC was fitted with a larger but heavier six-cylinder engine that contributed to the car’s somewhat worse handling. MG also began producing the MG Midget in 1961. The Midget was a “re-badged” and slightly restyled second-generation Austin-Healey Sprite. To the dismay of many enthusiasts, the 1974 MGB was the last model made with chrome bumpers due to new United States safety regulations. The 1974½ model had thick black rubber bumpers that many felt ruined the lines of the car. In 1973, the MGB GT V8 with the ex-Buick Rover V8 engine was launched and was built until 1976. As with the MGB, the Midget received frequent modifications until the Abingdon factory closed in October of 1980.

Motorcars Ltd takes great pride in keeping the MGs on the road. Motorcars Ltd offers maintenance, repair and service on all MGs including MGB, MGB GT, MG Midget and MGAs to name a few. We no longer perform “full restorations”, but we do provide restoration quality maintenance and repair services routinely.

Whether it is a simple carburetor rebuild, cylinder head work (yes, we even have our own machine shop) or brake replacement or repair, Motorcars Ltd has the facilities, tools and staff to perform to exacting standards.