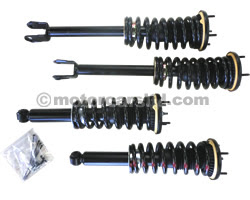 If you’re tired of dealing with these issues and you live in or near the Houston area, Motorcars, Ltd. has good news for you! Our own Blackdog Manufacturing’s “Air Suspension Conversion Kit” is a coil spring / shock absorber suspension package that is both permanent and inexpensive. Our suspension conversion kit replaces the factory air suspension components on all four corners of the vehicle thereby eliminating the faulty air suspension system for good!

Put Your XJ8’s Air Suspension Problems Behind You.

“I have had lots of problems with my air suspension. When Motorcars suggested that I replace the air springs with their spring conversion kit, I was skeptical and very concerned about losing the wonderful ride in my XJ8. I was assured that if I did not like the ride, that they would repair my old springs and replace my air suspension. On the very first test drive, I was shocked to feel how my Jaguar felt more solid but more controllable. I am now sold, and know what I have been missing all along – a smooth ride that I can toss around any corner anytime my husband pisses me off and make him spill his coffee, and still take it to the spa for a day of indulgence!” – K. (Houston, Texas)

“Amazing. I enjoy my Jaguar again. It was not an intellectual decision… it was for fun.” – J. (Austin, Texas)

“Driving back and forth to Houston every day, there are a lot of windy roads. I have a Porsche and my wife has a Jaguar. Motorcars converted the air bags in June 2011. Now I drive the Jaguar on the roads as much as my Porsche. Frankly, it handles like a dream – not as good as my Porsche – but far better than it did when it had air bags. It is the difference between night and day.” – B. (New Ulm, Texas)

“To say I am pleased with the conversion is an understatement, I am blown away with just how good the ride is – how anyone could be unhappy, well they must be very picky or have money to burn, I would be delighted to be a “reference” or provide a formal testimonial for this conversion, just let me know – as we discussed you would be crazy NOT to go for this. Thanks again for the great job.” – David (Austin, Texas)

“I am very pleased with the installation process and the drving experience of the new suspension. The ride is just as comfortable as the air version and I’m assured of the fact that I will not see the frustrating air suspension fault warning light coming out again!” – Chris L.

Have a look at my attached pic of the car after conversion.

Give us a call and join the growing number of XJ8 owners who’ve converted!

Motorcars Ltd can perform an Air Suspension Conversion which will rid you of the expensive Air Suspension failure and greatly increase your performace you can click on 1 of our 2 Houston area locations – Houston Central or Houston Midtown and we would be happy to help you with a quote. Become another satisfied customer!!

Note: The Air Suspension Conversion Kit IS NOT available from the Factory.